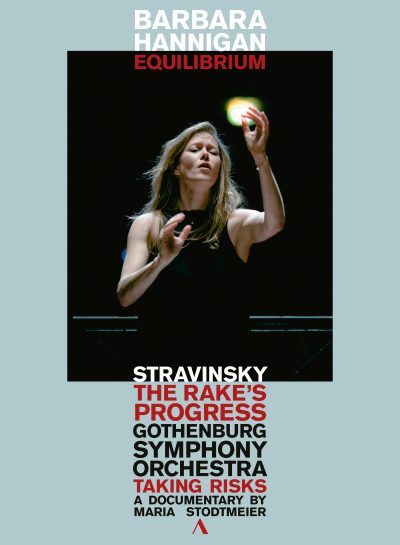 Barbara Hannigan’s intimate journey towards her debut as an opera conductor in Stravinsky’s The Rake’s Progress has been captured on film and will be released on DVD by Accentus Music. Taking Risks will be presented in a double disc release, alongside the performance of The Rake’s Progress, which took place in Gothenburg in December 2018 with the Gothenburg Symphony Orchestra.

The world premiere production was a “labour of love” for Hannigan, who has sung the role of Anne Truelove countless times. The soloists all took part in the inaugural year of Hannigan’s mentoring initiative, Equilibrium Young Artists, and were personally hand-picked by Hannigan from over 350 applications across 39 countries, with auditions across Europe. Launched in 2018 by Hannigan, Equilibrium Young Artists aims to mentor young professional musicians in the early years of their careers through intense workshops and high-level performance opportunities.

In Taking Risks, the documentary that accompanies the recording of Barbara Hannigan’s opera conducting debut The Rake’s Progress, the audience are given an exclusive and rare insight into the process of auditions, casting, rehearsals and more. Accentus Music accompanied Hannigan every step of the way towards the premiere of The Rake’s Progress, an opera which can only be described as an exceptional, momentous work.

In this unique and refined semi-staged production, director Linus Fellbom invites the audience to partake on a journey through space and time, from a distant future to the present, and back to 18th century London.

This is the second documentary DVD that Accentus Music has released with Barbara Hannigan, following the award-winning release of I’m a creative animal in 2015.