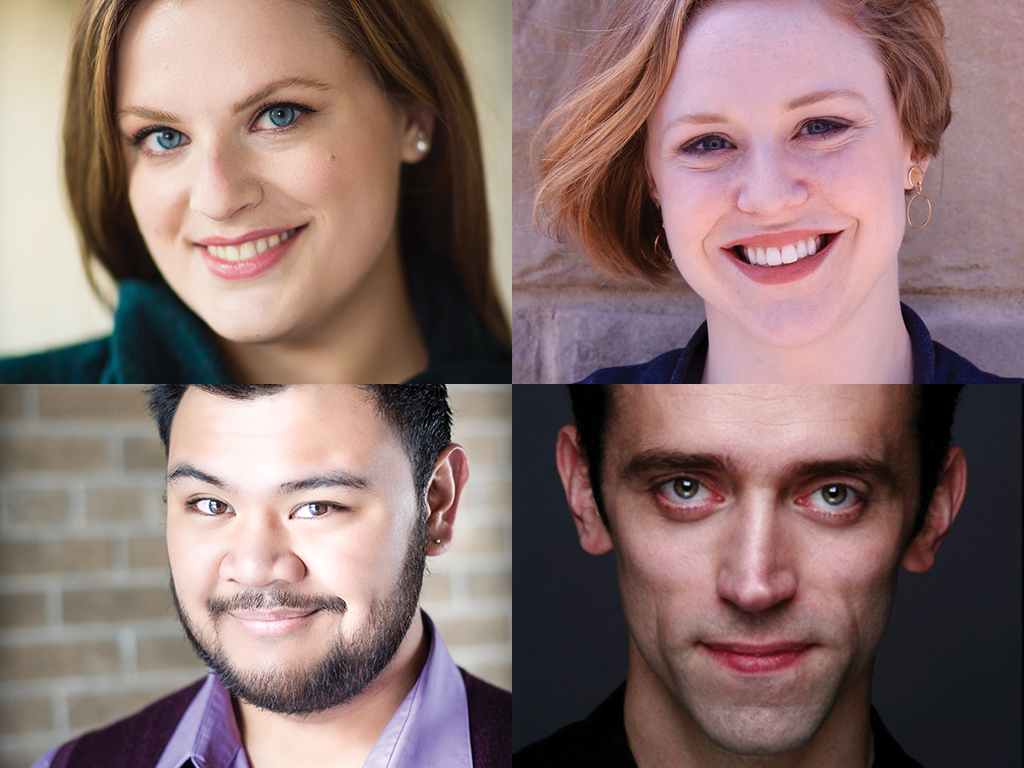 “It was absolutely inspiring to hear and meet everyone,” comments Barbara Hannigan. “We had to make difficult choices, as we could only select four singers for Mozart’s Requiem. Though we could not cast everyone at this time, I am delighted about the connections we made—connections which can play out in other, sometimes very unexpected, ways down the road. Now all of these remarkable young singers are on our radar.”

“I have been thrilled to collaborate with Barbara on this project and look forward to making music with such talented singers, who represent an exciting new generation of Canadian artists. There is a tremendous depth of talent in Canada,” adds Sir Andrew Davis.

In preparation for their upcoming TSO débuts, the four singers will attend an intensive EQ workshop with Barbara Hannigan at the Lunenburg Academy of Music Performance (LAMP) in Nova Scotia in August 2019. The EQ workshop involves working with Barbara as well as with Jackie Reardon—coach to Olympic medal–winning athletes (team and individual)—as well as leaders in business, technology, and the arts who have been working with EQ since its formation in 2017.

Jenavieve Moore, Jillian Bonner, Charles Sy, and Trevor Eliot Bowes will share the stage with the Toronto Mendelssohn Choir and the TSO, under the direction of Sir Andrew Davis, for Mozart Requiem on January 15–18, 2020. The program also includes Mozart’s Symphony No. 39. Subscriptions for the 2019/20 season are available via the TSO ticket line at 416.598.3375, or online at TSO.CA. Single tickets will go on sale in the summer.

Jenavieve Moore, soprano
Described as “an artist of extraordinary talent,” soprano Jenavieve Moore has a “silvery voice of great flexibility, precision, and beauty,” and is internationally renowned for her Mozart and Strauss interpretations. The young Canadian began gaining attention in London when she stepped in at the last minute to sing Verdi’s Requiem at the Barbican Centre for the opening concert of the 2014/15 season. Equally at home on the opera and concert stage, Jenavieve has performed across North America, Europe, and China. Jenavieve was born in Penticton, BC. She currently resides in Munich, Germany.

Jillian Bonner, mezzo-soprano
Hailing from Saint John, New Brunswick, Jillian Bonner is a graduate of the Calgary Opera Emerging Artist Program (2017–2018) and the University of Manitoba. A winner at the Boston District of the Metropolitan Opera National Council Auditions in 2019, Jillian’s notable engagements include Handel’s Messiah with Symphony New Brunswick and Mozart’s Requiem with the Winnipeg Symphony Orchestra. On the opera stage, Jillian’s recent roles include Dorabella in Così fan tutte (Calgary Opera, 2018) and The Fox in The Cunning Little Vixen by Janáček (Opera NUOVA, 2017).

Charles Sy, tenor
Toronto native Charles Sy has been recognized locally and nationally as a promising young artist with a “softly lyric sound, a natural sense of phrasing coupled with a rare willingness to project beyond the apron” (National Post). Charles completed his BMus and MMus degrees at the University of Toronto and is an alumnus of several prestigious opera training programs including the Britten-Pears Young Artist Programme, and the Opera as Theatre program at the Banff Centre. He is a graduate of the Canadian Opera Company’s Ensemble Studio and received First Prize and Audience Choice in the COC’s 2014 Centre Stage Competition. Charles is also a winner of the 2019 George London Competition. He is currently completing an artist diploma in opera studies at The Juilliard School.

Trevor Eliot Bowes, bass
Lyric bass Trevor Eliot Bowes was born in Victoria, BC, and studied at the University of Toronto, the Banff Centre for the Arts, the Britten-Pears Young Artist Programme, and the Royal Scottish Academy of Music and Drama. He has been praised for his “light but very dramatic voice” and “great potential as a singing actor.” (Opera Canada). He has appeared at the Aldeburgh Festival, the Toronto International Bach Festival, and Opera North in Leeds where he performed opposite Sarah Connolly as Talbot in Donizetti’s Maria Stuarda. More recently, Trevor made débuts at the Glyndebourne Festival in Der Rosenkavalier and English National Opera in Salome, La Fanciulla del West, and Lady Macbeth of Mtsensk. Trevor is featured as Arimanes in the 2016 Naxos recording of Balfe’s Satanella with Maestro Richard Bonynge.

Equilibrium Young Artists
This collaboration marks the first time Barbara Hannigan brings her mentoring initiative, Equilibrium Young Artists, to Canada. Hannigan and the Toronto Symphony Orchestra have a long-standing history of introducing firsts to Canadian audiences, including Hannigan’s début with the Orchestra (as soprano) with the Canadian Première of Ligeti’s Mysteries of the Macabre in 2000, and Hannigan’s North American conducting début in 2015.

The Lunenburg Academy of Music Performance (LAMP) is an international centre for advanced studies in performance and interpretation in beautiful Lunenburg—a UNESCO World Heritage Site. LAMP provides extraordinary emerging performers with career-changing opportunities to work with many of the world’s most versatile and accomplished artists.

The TSO Season Presenting Sponsor is BMO Financial Group.
The Toronto Symphony Orchestra is generously supported by the Canada Council for the Arts, the Ontario Arts Council, and the City of Toronto.

About the TSO: One of Canada’s most respected arts organizations, the Toronto Symphony Orchestra (TSO) plays a vital role in the city’s dynamic cultural life. Committed to serving local and national communities through vibrant performances and expansive educational activities, the TSO offers a wide range of programming that resonates with people of all ages and backgrounds. With a notable recording and broadcast history complementing international touring engagements, the TSO is a unique musical ambassador for Canada around the world.

The TSO continues its long-established history of connecting younger generations with orchestral music. Two core programs include School Concerts, performed for over 40,000 students annually, and the Toronto Symphony Youth Orchestra (TSYO), which, in a tuition-free model, offers high-level orchestral training for talented young musicians aged 22 and under. Additionally, the TSO supports the development of next-generation artists through its annual open call for Canadian orchestral scores, and its essential Resident Conductor and Affiliate Composer positions.

The TSO was founded in 1922 by a group of Toronto musicians and gave its first performance at the historic Massey Hall. Since 1982, Toronto’s iconic Roy Thomson Hall has been the TSO’s home, drawing patrons from around the world. Soon to celebrate its centenary, the Toronto Symphony Orchestra’s name remains synonymous with musical versatility and growth, and artistic distinction.