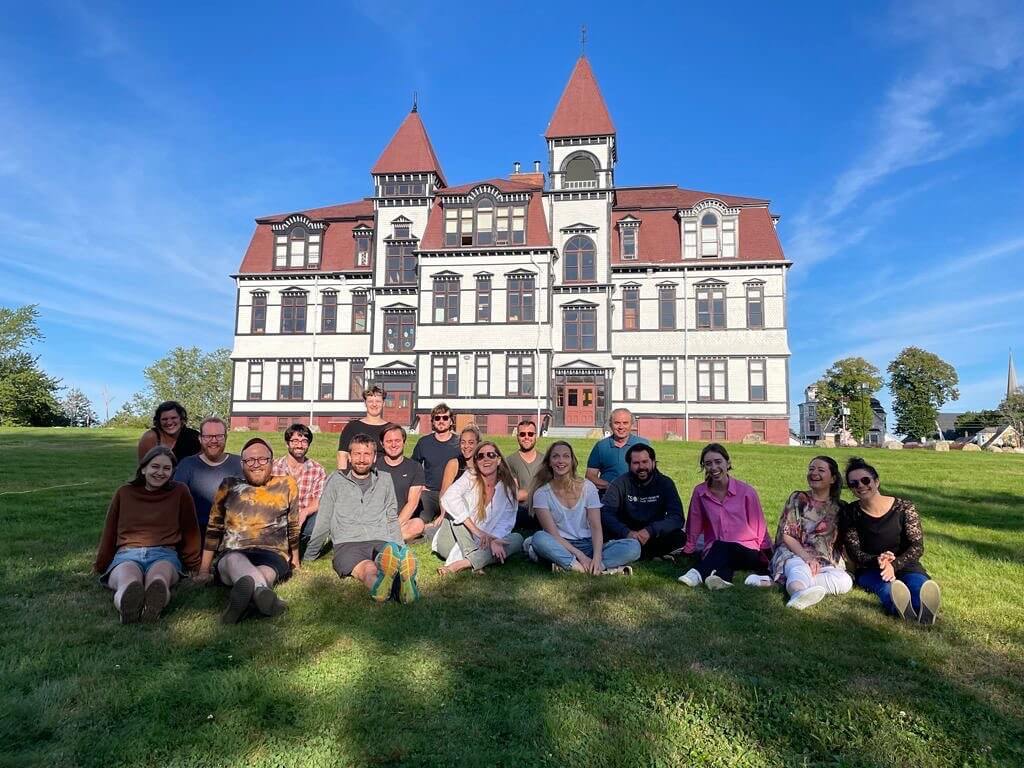 A year later than planned–thanks to that which shall not be mentioned–a group of seventeen artists, a mindfulness coach and a T’ai Chi teacher met at the Lunenburg Academy of Musical Performance in Nova Scotia to make music, discover, eat seafood, search, feel, rediscover, react, recover, look inward, learn how to bow again after that thing which shall not be mentioned and, and…

The practical difficulties I was facing after so much time away from the stage were many–and I had some emotional grappling to do. It turned out that I wasn’t the only one. Being mostly in the beginning phases of our careers, focussed on building and expanding, it was no surprise that these past sixteen months had taken a particularly hard toll. So, there we were, sitting with three kind, generous, wise, and powerful people–Barbara Hannigan, Jackie Reardon, and Patrick Stanley—who would guide me through a week that I needed more than I knew.

LAMP is, in itself, a marvel. The academy lives in a grand manor that sits atop Gallows Hill “like a great Victorian matriarch”, as it says on their website. Every window looks out to scenes so surreal and picturesque I could hardly believe my eyes. Lunenburg is a postcard town. The ocean air blows through the big estate revitalizing everyone inside. It’s one of those magical places that, thanks to the setting and the history, feels limitless in creative possibilities.

Barbara asked the singers and Isabelle (EQ’s pianist-heroine-of-the-week) to prepare some art song repertoire and we each took a movement of William Walton’s Façade, performing Edith Sitwell’s eccentric and rhythm-infused poems in wild caricatures with the instrumentalists rocking his virtuosic, joy-inducing carnival tunes alongside. Gavin Fraser, LAMP’s composer-in-residence, was commissioned to write a piece for Barbara and our unique mixed chamber ensemble (flute, clarinet, saxophone, trumpet, cello, piano, and percussion). I was excited to be one of the two other singers invited to sing in Gavin’s setting of Sue Goyette’s Penelope – in first person. Sue Goyette is a Canadian poet living in Nova Scotia and I was elated to spot her in the audience. Wow. Her Penelope was one of the most engaging pieces of writing I’d come across in a long time and Gavin’s setting beautifully captured the wonders of her text. Being in the room with these seven incredible players under the calm leadership of Simon and the intoxicating singing of Barbara and Magli was so powerful. The commitment everyone showed and shared reminded me how special and important this work can be.

We spent time together each day on mindfulness training with Jackie and practicing T’ai Chi with Pat. As you can imagine, this sort of work breaks down barriers between people pretty quickly; the ice was broken in the first session on the first day. I don’t quite know how to sum up all the work we all did—it was probably different for everyone—but I know that I left with many more tools and information than I arrived with. Perhaps presumptuous to say but one thing I think we all explored was the ability to look kindlier and with less judgement at ourselves. Thanks to being guided by people who don’t judge you, who focus more on your strengths than your weaknesses, and who lead from positivity instead of negativity, it was all the more possible to succeed and feel proud.

The first time the singers heard each other was already a few days into the week. Before that we were busy with 19th century rap (Façade). It was nerve-wracking and emotional. There were tears of joy and sadness, laughter, serious questioning, honesty, and many hearts on sleeves. Some deep performance fears and insecurities were shared and discussed. Beyond all of these chats and tears and laughs, each singer got up with Isabelle and just knocked their song repertoire out of the park. I wish I had a recording of Barbara’s (and everyone’s) emphatic exhales of delight after each singer. We slayed. And it was therapy. I know I speak for everyone in that room when I say thank you to every singer, to Isabelle and to Barbara for reminding us of our power and for giving us a space to share it–without it feeling at all like judgement day.

The past sixteen months have been _________ (choose your adjective); life as a performing artist has been a real challenge. When it became clear that the EQ week with Barbara would happen, I knew it was going to be important, just not how important. Every single person in that majestic building gave every other person a piece of themselves throughout the week and it had a profound effect.

And do you know what also helps just about everything…? Lobster rolls.

I’ll finish with the famous quote of the week. A bit of an inside joke…

I’m filled with such gratitude to LAMP and its staff, to Jackie and Pat, to all the incredible artists I met and was totally inspired by and, of course, to Barbara for her huge commitment, generosity and encouragement.