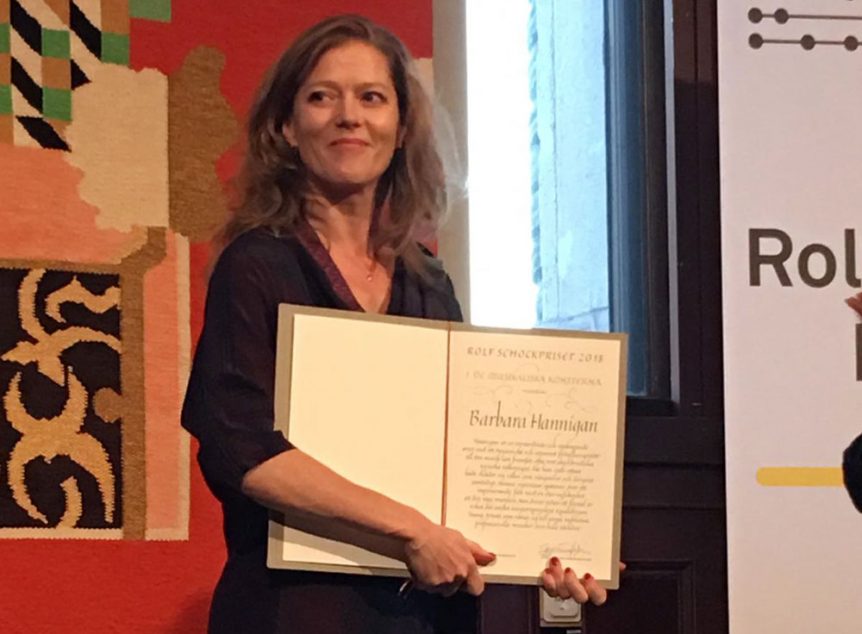 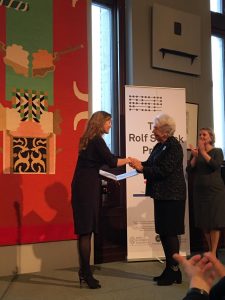 Upon receiving the award Hannigan announced she would donate the prize money to her mentor initiative, Equilibrium Young Artists.

Barbara Hannigan is one of four individuals to win the prestigious Swedish award this year. The other Laureates include Saharon Shelah (Logic and Philosophy), Ronald Coifman (Mathematics) and Andrea Branzi (Visual Arts).

Princess Christina, Your Excellences, Honoured Laureates, Members of the Academies, Ladies and Gentlemen, good afternoon. Thank you so much for inviting me today: I am thrilled and honoured to be here.

Mr Branzi, Mr Coifman, Mr Shelah, my distinguished fellow laureates, it is humbling to be included in your company today.

In preparation of writing this short speech, I tried to inform myself on each of your work, and to think about what connections we may have.

Mr Branzi, I was already familiar with your innovative, alchemical and adventurous designs, and in reading an interview with you in Corriere della Sera, you described
research as being, in part, a creative activity which is seemingly without purpose. This resonated strongly in my own way of work and study in music. Indeed we are searching, but at times we have no expectation of finding anything…we are just enjoying the search! And it can lead us to the most unexpected discoveries.

In your case, Mr Coifman, when these prizes were announced, the press release referred to your work in pure and harmonic analysis, and I thought: harmony, now HERE’S something I know a thing or two about! But, well, I realized quite quickly that we are dealing with different harmonies in our respective fields, but most certainly both are beautiful and pure.

I attemped to read a paper of Mr. Shelah’s online, published by the American Mathematical Society. Not surprisingly, comprehension from a layperson like me was impossible, but I’ve got to say, I LOVED the title! Logical Dreams. Indeed, something we all have in common is that our paths have been forged through the pursuit of our dreams.

Logical or illogical, these dreams, and the passion that has fuelled them, have sealed our lifelong commitment to our respective vocations.
I use the word vocation, as opposed to profession, because I love that, at vocation’s etymological root, is the use of the voice: to be called.

In my case, making music was my dream. As a child, in the village of Waverley, Nova Scotia, music called me. My parents nurtured that little girl who loved to sing, taught me how to work consistently and with discipline, encouraged me to put in my hours of practise, meticulously scheduled, even when I didn’t feel inspired, and helped me to find the right teachers and mentors who would help me develop my skills.

More recently, conducting orchestras has taken a special place alongside singing. In both roles, I join my fellow musicians in resonating with what a composer has written, listening deeply to one another in service of the score, and witnessing and sharing that concentration of sound with those who are listening.

It has been especially rewarding to work with living composers. After 30 years of giving world premieres, I am very grateful to still be performing – at age 47, which is getting up there for a female opera singer. Yet I am little surprised to notice that I am one of the older singers in an opera production, instead of the youngest. I was chatting to a colleague a couple of years ago, remarking that we were resembled one another…and he said…YES! You look just like my mother! That was a wakeup call, and it confirmed that it might be time to add a new string to my bow. And before I knew it, I’d created a mentoring initiative for young professional musicians, which I decided to call Equilibrium.

Equilibrium exists to help young artists during the first substantial phase of their career, to help them establish their discipline and work ethic, so that amidst all the musical and non-musical challenges they are facing, their passion for music can stay at the core of their career.

Most musicians start training for their career as children, literally playing music, and they follow this dream with joy and abandonment. The line between music as extra-curricular activity into training to be a professional is blurred. And then suddenly, they find themselves in the first years of a career. Even coming to terms with the word professional, is daunting! Young artists are constantly facing a barrage of challenges: new colleagues, foreign cities and languages, choosing the right repertoire, dealing with the effects of travel and the loneliness of being on the road, being away from friends and family, the psychological effects of public criticism in the papers and on the internet. They are just trying to build up enough savings to pay their rent and their flight to the next audition, and subsequently dealing with rejection and disappointment, at the same time as their bank account is nearing empty. They are learning to manage their own time and balance their priorities, without the imposed schedule of a conservatory or opera school. Many are trying to find their way without an agent to help them decide which engagements they should accept, and under what terms. Many of these challenges will last a lifetime, but finding ways to deal with them at the beginning of a career can be especially tough and unsettling. For young artists to understand that the performers they look up to, the artists like me, old enough to be their mother or father, also had moments when we wanted to give up performing, periods of turmoil when we succumbed to pressure from others to compromise to the point of losing our balance, times of public triumph mixed with personal uncertainty and vice versa. When we take the time to mentor our younger colleagues and share with them the various various methods we have developed, (many of which actually work!), we help them to get through these tough times and back to the heart of what it is to be a musician.

This year Equilibrium is a team of 24 young musicians: 20 singers and 4 conductors. Handpicked from a field of over 350 applicants, this group of artists, (talented, disciplined, curious and courageous), hail from 12 countries worldwide, from Guadeloupe to Canada to Australia. Three are Swedish! Our work together is made up of intensive retreats and workshops, and public performances with top level orchestras in both Europe and North America. We will start this season a few kilometres north of here, with the generous participation of the Gothenburg Symphony Orchestra, performing Stravinsky’s masterpiece The Rake’s Progress, with me as conductor, and directed by Linus Fellbom.

I realize how important mentors have been in my own development, and remain to this day. There is only so much one can learn from googling…We need to connect with people, heart to heart! We need to tell stories to one another, and share and pass knowledge forward, using our voices.

At this moment I would like to mention and thank two mentors who are particularly present with me at this time. Both octogenarians, the first is the Dutch conductor/composer/pianist and musical soul Reinbert de Leeuw, who has been my guide for almost 20 years. We have worked together all over the world, and he is largely responsible for the musician I am today. Whenever I am down, or out of balance, or wondering where the music has gone, I give him a call. Even just thinking about him does the trick most of the time.
The other mentor I wanted to mention is a new addition to my life: the Israeli dancer and choreographer Rina Schenfeld, with whom I have been sharing the stage at Paris Opera Garnier these past weeks. At 80 years old Rina is still dancing, her body and energy incredibly youthful, from years of joyful discipline and commitment to her art. Whenever I walked into the rehearsal room these past months at the Paris Opera, the sight of Rina warming up was a shining beacon of inspiration, and a reminder to me to keep searching.

This recognition gives me the opportunity to pass this award directly forward to Equilibrium. It will benefit them enormously. My sincere thanks to the legacy of Rolf Schock, whose generosity to all our vocations is deeply felt and appreciated.